Hey Paul,
From your experience, what is your preference when it comes to measuring the temperature of your PQR's?
At current I have access to 7 different rated tempilstik's, but that doesn't sound like a reasonable arsenal to do the job....or is it?
The IR Pyrometer I have is unreliable at best (as well, no calibration records).
If anything, I'm intrigued by the digital contact pyrometers out on the market. Specifically the Estik looks good, though the 2% tolerance for each displayed value is a bit concerning in the upper limits.
As always, thanks for your insight to age-old questions for us newbies!
Neil

Good questions…
The thing about the Temp Stix is that they are considered the “accepted” method (no controversy), especially when dealing w/Governmental agencies (Army Corp of Eng, DOT…).
Honestly? I use my IR gun to determine which TempilStik to use.  Sounds weird, I know.
If I can prove to myself that my IR gun is accurate (often dependent on surface condition) I’ll use its readings, but if I’m the least bit concerned, I turn to the TempilStik.
Here’s how I’ll write a PQR: 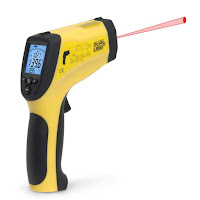 Kinda messy, but I don’t know a better way to do it and it’s never been questioned.  In fact, when they see the ranges they almost automatically know I used a TempStik and don’t question it.
I use to have a contact pyrometer and would spend a lot of $$$ keeping it calibrated.  After going into biz on my own I simply wrote a calibration procedure that stated “Place probe in ice water (50% crushed ice/50% water) let stand 10 min.  Insure temp reads 32 deg F +/-5%”.  That always worked (right up until I lost it).